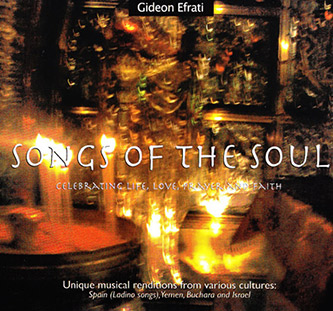 On Bridging the Authentic and the Artistic

As one who was educated on the knees of classical singing and playing, I chose to present a unique recital comprised of musical materials from Jewish ethniticities all over the world, some of which I partially collected, preserved adapted, and recorded merging the classical vocals and the characteristics of traditional folk songs at times with a guttural projection tending to quarter tones. In addition, I composed music for liturgical texts and texts of ancient poets and contemporaries in various languages: (Hebrew, Arabic, Latin, Yiddish, German, Spanish, Ladino, Yemenite, Farsi, English et cetera).

The first CD in this series is entitled 'Songs of the Soul' and includes a collection of songs in the spirit of reconciliation and religious belief.
Gideon Efrati

I am only one, but still I am one.
I cannot do everything, but still I can do something.
I will not refuse to do the something I can do. (Helen Keller)

Like the dove, we have an innate right to freedom, and the ability to soar and follow our dreams, but we also need a resting place, a place we can call home.
Home is a family. Home is also a society, a people, roots, traditions and customs. A home is freedom: the freedom to want, to do, to choose and to create. This album is a dream realized, with love of mankind and the spark of God glowing in our hearts. The different traditions represented are an attempt to unify through music the divine in each and every one of us.
At the end of the flood, which destroyed the sinful world, Noah looked up and saw a gorgeous rainbow in the sky symbolising God’s promise never to destroy life again.
Gideon Efrati–Tel-Aviv, Israel March 2006

A celebration of love and faith...
Rose Shafran, Cleveland Ohio

A true pearl...Gideon Efrati is unveiled in all his splendor…
Lise & Tom Fairfield, LA, California

A magical and delightful album that plucks the chords of the listener’s soul…
Ilee Eshhar, Ketura, Israel

I was captivated by the album’s magic...its fresh composition and execution of the first song–Shir haMa’a lot–in which both Efrati’s power and his tenderness are exposed: the intensity of juxtaposition through his singing...
Doron Ro't, Kibbutz Shaar Hagolan, Israel

In Songs of the Soul Gideon Efrati has created a magnificent synthesis of ancient and modern, earth and heaven, human and divine.
The voice of the individual seeking the spiritual is at the center of Jewish musical creation, in an unending chain that links the Psalms of David with the simple cantor chanting the holiday liturgy. Gideon Efrati has forged a new and brilliant link in that chain.
While the musical production is the work of a master arrangers and musicians (Deddy Tzur & Gideon Efrati), the vocal renditions themselves comes directly from the heart and soul of a remarkable singer and performer.
Bill Slot, Ketura, Israel

Dear Mr. Efrati,
I listened rapt to your solo album, Songs of the Soul, which I found to be utterly impressive as well as exquisitely tasteful. The arrangements and executions of the songs were of the highest artistic level. The meticulous choice of texts and melodies was both rich and heartwarming, resulting in a mosaic reflecting an artistic continuum beginning before Israel’s establishment and continuing on to the artistic renewal period thereafter.
The handsome graphics and liner notes themselves constitute yet another tier of both magic and sacredness, completing the entire experience.
You succeed in bringing to your singing a rich artistic "cargo", profound and mature, containing deep feeling and soul, all coming together to create a spiritually uplifting experience for each individual fortunate enough to hear it.
May you go from strength to strength, and wishing you much luck.